Sodium acid pyrophosphate is an inorganic compound consisting of sodium cations and pyrophosphate anions. It is a food additive whose role is to improve the quality and stability of food products. 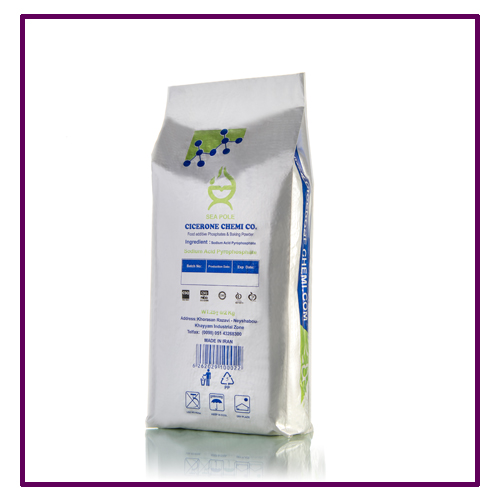 At first, when the moisture is added to form dough, sodium acid pyrophosphate reacts with sodium bicarbonate to produce carbon dioxide gas.

Also, pyrophosphate during reaction with sodium bicarbonate creates ionic bounds with starch and protein of dough.

SAPP also dissolves readily to provide anion, anionic pyrophosphate, which interferes with proteins in a well-cooked system to create a moist tissue.

21g of sodium and 28g of phosphorus are available in 100g of SAPP. FDA regulations

In the United States, SAPP has been approved as a versatile food ingredient commonly known as Safe Food (GRAS).

Creating a buffing system in the dough provides a pH of 7.3-7.5 that affects the color of the cooked product.

-As SAPP acts slowly and does not react quickly with sodium bicarbonate, it is the most common acid used for baking flour products.

-In addition to flour and bakery products, it is used in the production of biscuits, doughnut, pancakes, cakes, and baking powders

-As SAPP can have a slightly bitter taste, it is important to use sufficient baking soda in the formulation of products such as cakes.

-It prevents color change in potatoes and sugar syrups.

-It prevents the formation of steroid crystals in canned fish tones.

- It is an emulsifying agent in cheeses and related products.

- It accelerates the cooking in processed meat and poultry products